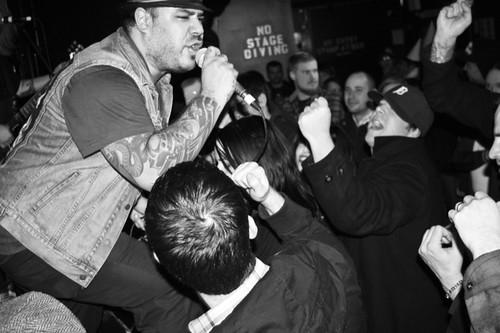 There comes a time in everyone’s life where they have to set aside all of their attempts at being cool. At times, you just have to give in to the things you like without worrying about who is watching or what you look like. Saturday night’s show at El Corazon was one of those times.

There’s a hierarchy of perceived musicianship that I would like to share with you now. This is, of course, completely my opinion and pretty arbitrary and general. Here it is, from most musical to least musical:

Screeching Weasel is a political punk band specializing in silly songs about Nicaragua or suburbia. Their heyday was the early ’90s, when they signed with Lookout! Records. On Saturday, two gentlemen from recently disbanded Kane Hodder and two of their compatriots from Smokejumper comprised Fake Screeching Weasel. They played the silly political punk songs faster than seemingly possible. The crowd responded by singing along to the classic punk rock “woah oh oh ohs” on classics like “Hey Suburbia.” Though no mosh pit broke out, the audience was clearly enjoying themselves.

The highlight of the evening, in my opinion, was Fake Minor Threat. Even though I was just entering kindergarten when Minor Threat broke up, they have been an important part of my musical psyche since I discovered punk. The cover set felt a lot like 1982. Prominent hardcore musicians did a fantastic job of recreating the spirit of the founders of straightedge hardcore. It was fantastic to wave my fist in the air and sing “Out of step with the world!” with all the other old straightedge folks. There’s nothing like a little circle pit to get the 30+ year old hardcore crowd going.

Honorable mention goes to the guitarist from Fake Guns n’ Roses for doing an amazing job of accurately replicating Slash’s lead guitar parts. Chris Cab himself mentioned on his Facebook page that it was better than any Gn’R show in the last 15 years.

Overall, the night was about forgetting to be cool and just having fun. It was a night for reliving the best times of our lives. It was a night to remember. It was everything a birthday party should be. And happily enough, I understand that this will be happening again next year.